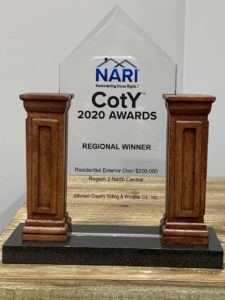 Johnson County Siding & Window Co. is proud to add yet another award to its trophy case—this time the honor of being named regional Contractor of the Year (CotY) for 2020 by the National Association of the Remodeling Industry (NARI) in the category of Residential Exterior Remodel Over $200,000.

The CotY Award recognizes excellence among remodeling contractors in NARI’s Region 3 North Central, which encompasses Kansas, Missouri, Illinois, Iowa, Minnesota, Nebraska, Wisconsin, and North and South Dakota. The regional competition is part of the national awards program that NARI conducts annually to recognize superb workmanship by its members. According to a NARI spokesperson, the CotY Award is the highest form of recognition by the remodeling industry’s leaders and peers, and nearly 500 entries were submitted for this year’s competition.
“This year’s submissions were outstanding, making the job of our esteemed judges very difficult,” said Tracy Wright, Senior Director of Membership and Chapter Services at NARI. The judging panel selected winners based on problem-solving, functionality, aesthetic appeal, craftsmanship, innovation, and degree of difficulty.

Johnson County Siding & Window Co. has been helping homeowners throughout the Kansas City metro area achieve exceptional exterior remodeling results for more than 40 years, so the latest Contractor of the Year recognition will come as no surprise to many in our service area. It joins a long list of previous awards, including: 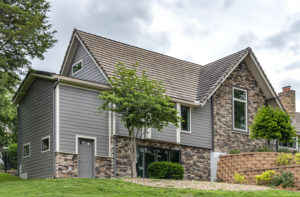 What’s more, our winning entry, a beautifully remodeled 1970s home in Olathe, Kansas, previously was named Remodel of the Year by the Kansas City NARI chapter. You can read about our REMY GOLD Award here, and the project that earned it here.

Naturally, we’re excited to have won one of the industry’s highest awards, but even more important is the evidence of our dedication to excellence that this award embodies. It’s yet one more reason why homeowners in the Kansas City metro area can feel confident when they turn to us to help them create their dream home.

If you’re on the hunt for an exterior home remodeling contractor for a project in the Kansas City metro area, contact Johnson County Siding & Window Co. today to learn about our services and credentials.


- Kyle R.
Johnson County Siding & Window Co.
"We used Johnson County Siding and Window in our previous home about 20 years ago, and were very pleased with their work. So, when we needed new windows in our current home, we knew we wanted to use them again. And we were not disappointed! They were professional and completed the job in the time expected.”